As indicated in explanatory dictionaries and encyclopedias, bending is giving something a curved shape. In our case, flexible is understood as a locksmith operation of bending workpieces from profile materials. Under the action of the bending moment, the workpiece is deformed, its outer layers are stretched, the inner ones are compressed.

We carry out bending with the help of three-roller machines manufactured by the Swiss company Profilbiegetechnik AG, which is a recognized world leader in the production of bending machines. 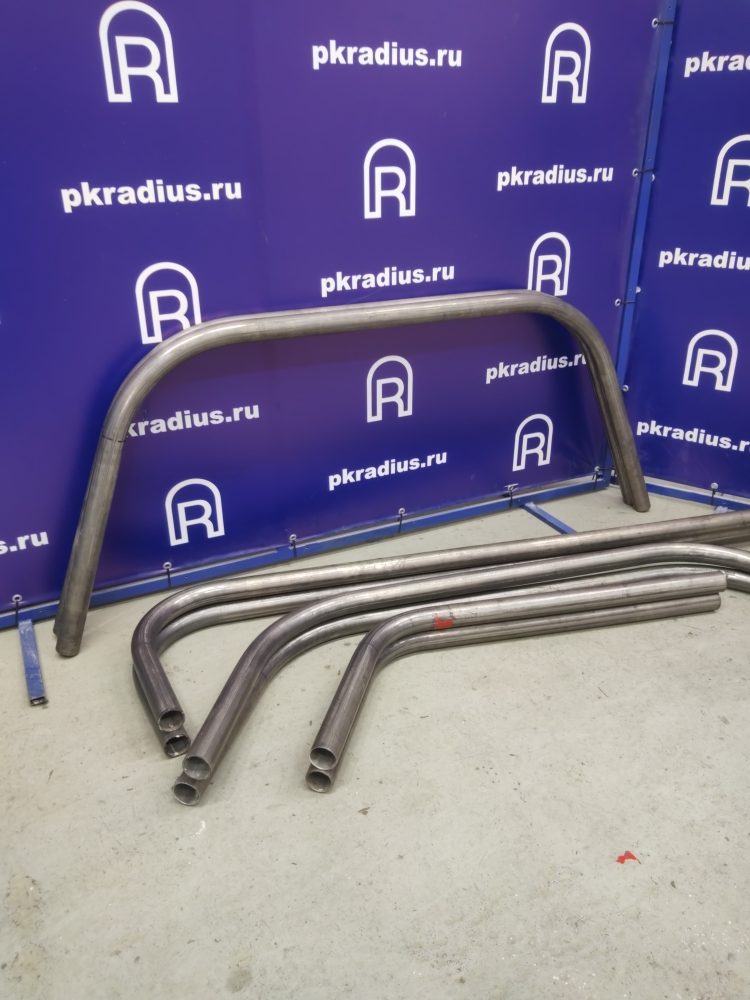 The bending is carried out as follows. In order to avoid collapse, the profile chambers are filled with special sand, it is rammed, then the profile is inserted into the rollers between the two front and one central. The rollers are synchronized and rotate all in one direction until the profile is rolled along the entire length of the workpiece, then in the other direction. One rolling of the profile is called one pass. With each pass, the central shaft approaches the frontal ones, due to this, a bending moment arises. The force during bending can reach 30 tons. Rollers are made for each type of profile. The number of passes is set by the machine operator and adjusted during the bending process depending on the required radius and other tasks. 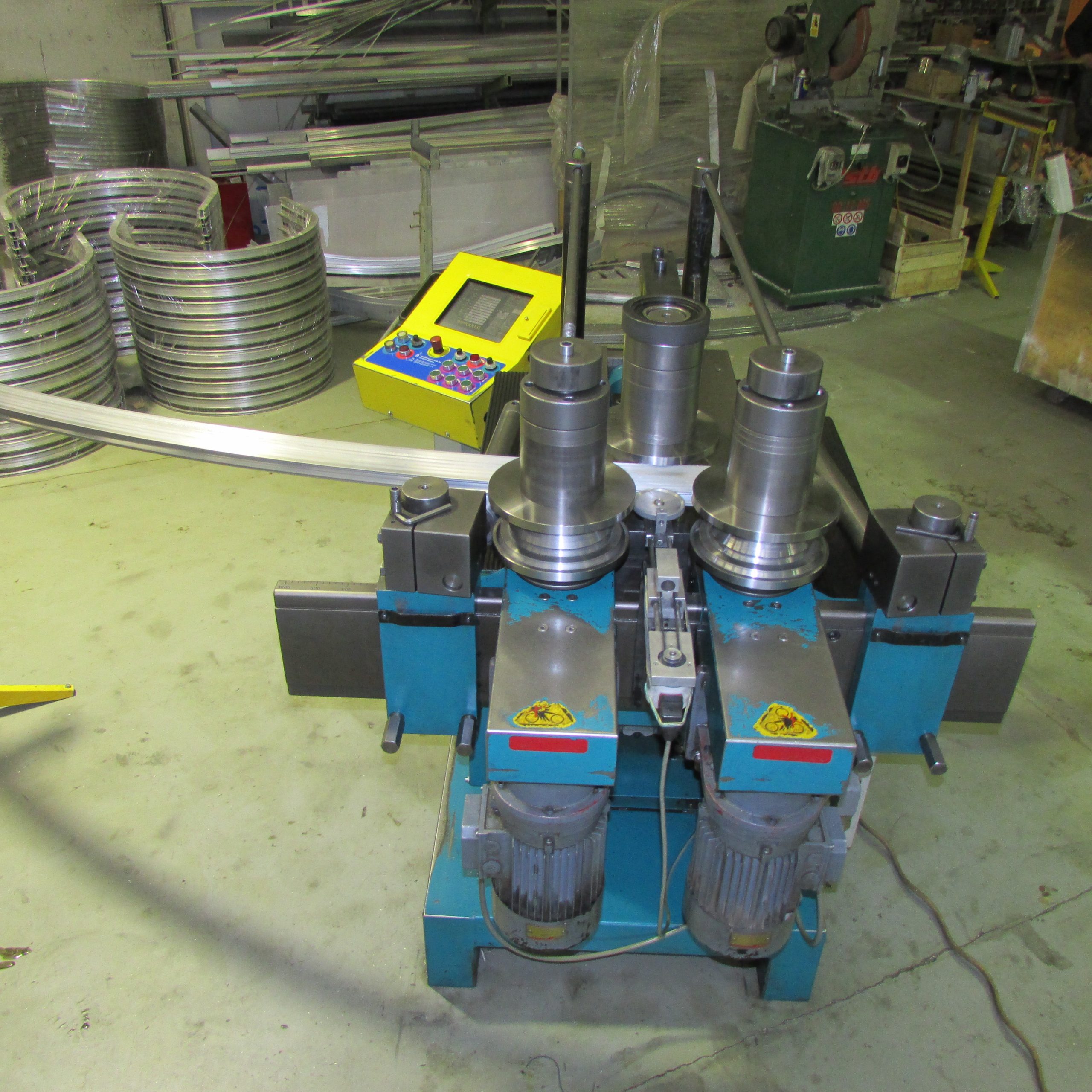 What is a technological allowance?

The landing diameter of the rollers is 105 mm, the diameter of the pressure surface is 130/140 mm. The outer diameter of the rollers can reach 160/220 mm. As experience has shown, such parameters of the rollers are optimal for radius bending of both system profiles made of aluminum and profiles made of steel. Due to the external dimensions of the rollers, a technological allowance is formed. Since the central roller presses in the middle of the frontal ones, and the profile is clamped in them, the bending moment occurs at some distance from the edge of the profile. Therefore, the bent profile has straight, non-bent edges. On average, the technological allowance is 300 mm on each side or 600 mm in the workpiece. It also depends on the cross-section dimensions of the profile and can reach 1000 mm in the workpiece. 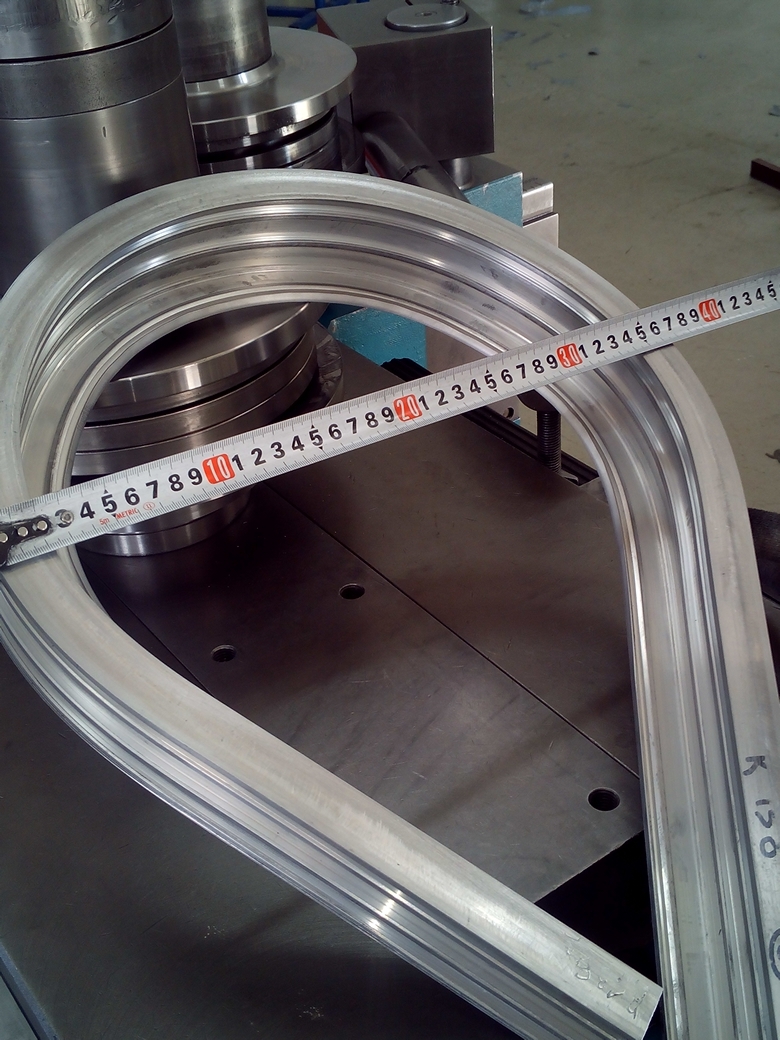 What is the output of straight parts?

Sometimes the task is to make a smooth transition from the radius to the straight part. The task is complicated by the fact that during the bending process, the profile is always deformed and excess material is driven to the edges, so a thickening often appears on the straight part, at the transition point, visible to the naked eye. In order to eliminate this thickening, there is a special rolling operation that allows for a smooth transition from an arc to a straight line. When designing such parts, it should be taken into account that the output of the straight part is possible only tangentially to the arc (so the radius drawn at the transition point is perpendicular to the straight output). 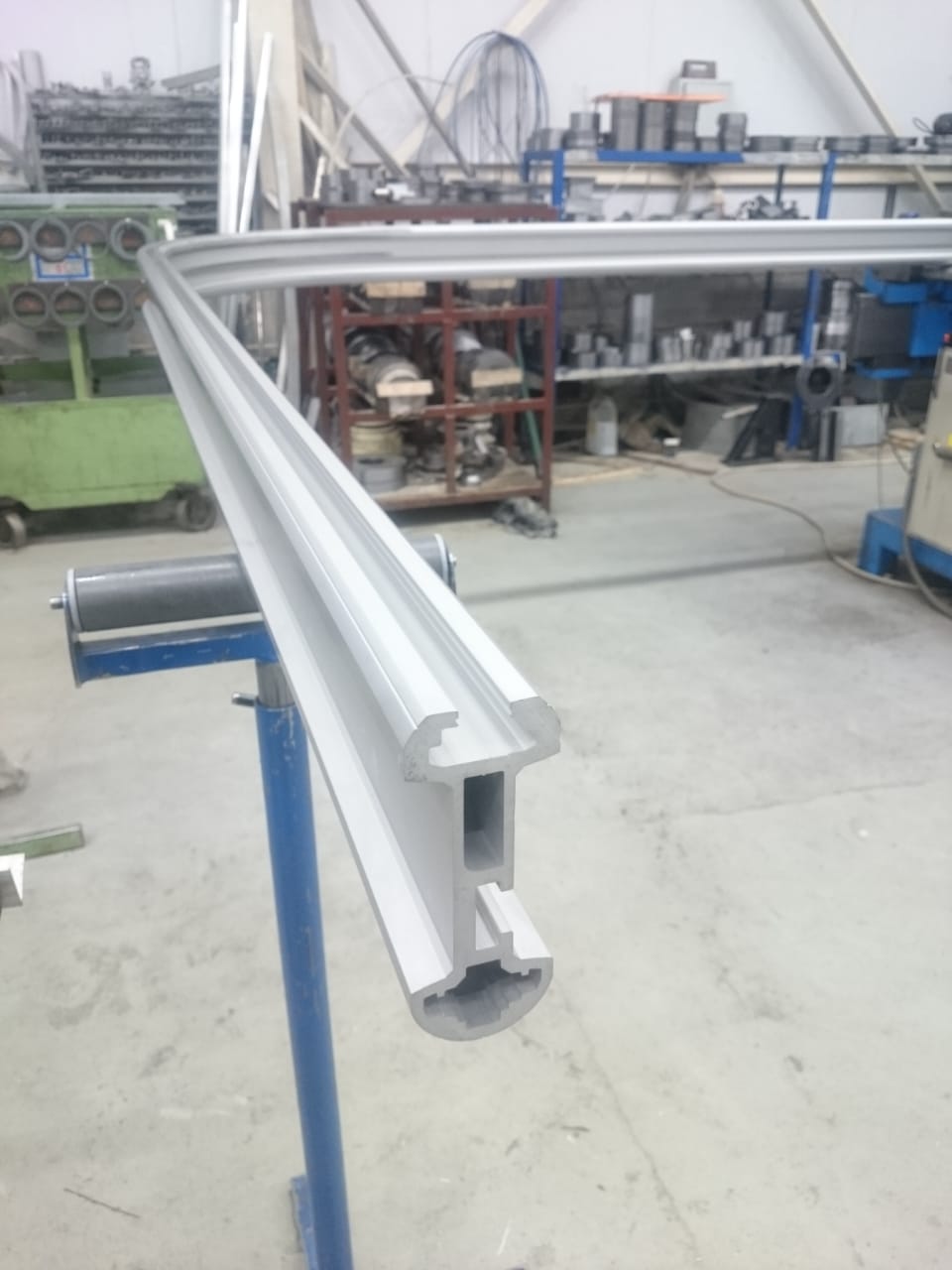 What are the different directions of bending?

If you draw a cross section of a profile, for example, a crossbar, and draw the X and Y axes, then when bending for flat (arched) glazing, the bending radius will be directed to the side wall (Rx), this is bending along the X axis; and when bending for molar (bent) glazing, the direction of the bending radius will be at the end of the profile (Ry). These are the two most common areas of bending. When glazing domes, sometimes there is a need to bend the crossbar, which lies in a horizontal plane, but is turned to it at an angle, the bending radius will then be directed between the X and Y axes (Rxy), such bending is called two-plane. Back in 2006, our company developed its own two-plane bending technology, and so far it is the only one in the Russian Federation offering such a service. In 2015, the task arose to bend the arch from the facade profile on the radius wall. Our company is also the first in the Russian Federation to successfully cope with this task. Because as a result of bending, a spatial curve is obtained, we called this bending (X,Y,Z). Types of arches: simple arch with one radius; an arch with several radii on one blank.

How is the bending radius measured and controlled?

The bending radius can be measured mechanically and electronically. The mechanical method is considered more reliable, but also longer. When applying the mechanical measurement method, the principle described in the section “Bending Calculator” is applied, i.e. by two parameters: H (chord) and h (chord height). The role of the chord is usually played by a specially made measuring ruler, and the height of the chord can be measured with a compass rod. 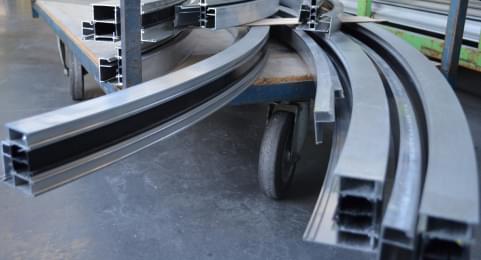 With what precision is bending performed?

The accuracy of bending depends on the tools used, the quality of the profile and other parameters, for example, such as the length of the arc in relation to the radius. In addition, due to poor-quality material, sometimes there is such an effect as the dispersion of radii, i.e. the spread of radii along the entire length. This leads to the need for careful control of the overall dimensions of the arc. There is no ideal material (profiles), and the radius is always measured with some accuracy, the main thing is that this accuracy satisfies the tasks set. For each bending task, you can calculate your measurement accuracy, i.e. limits of deviations. For example, in mechanical measurement, the accuracy of measuring with a rod-compass is up to 0.1 mm, for the measuring ruler used, the limits of deviations can be calculated. They are always obtained below the profiles required for processing. When bending facade profiles in the direction for molled (bent) glazing, the manufacturing accuracy of double-glazed windows is always lower than our bending accuracy, our checks have shown this. 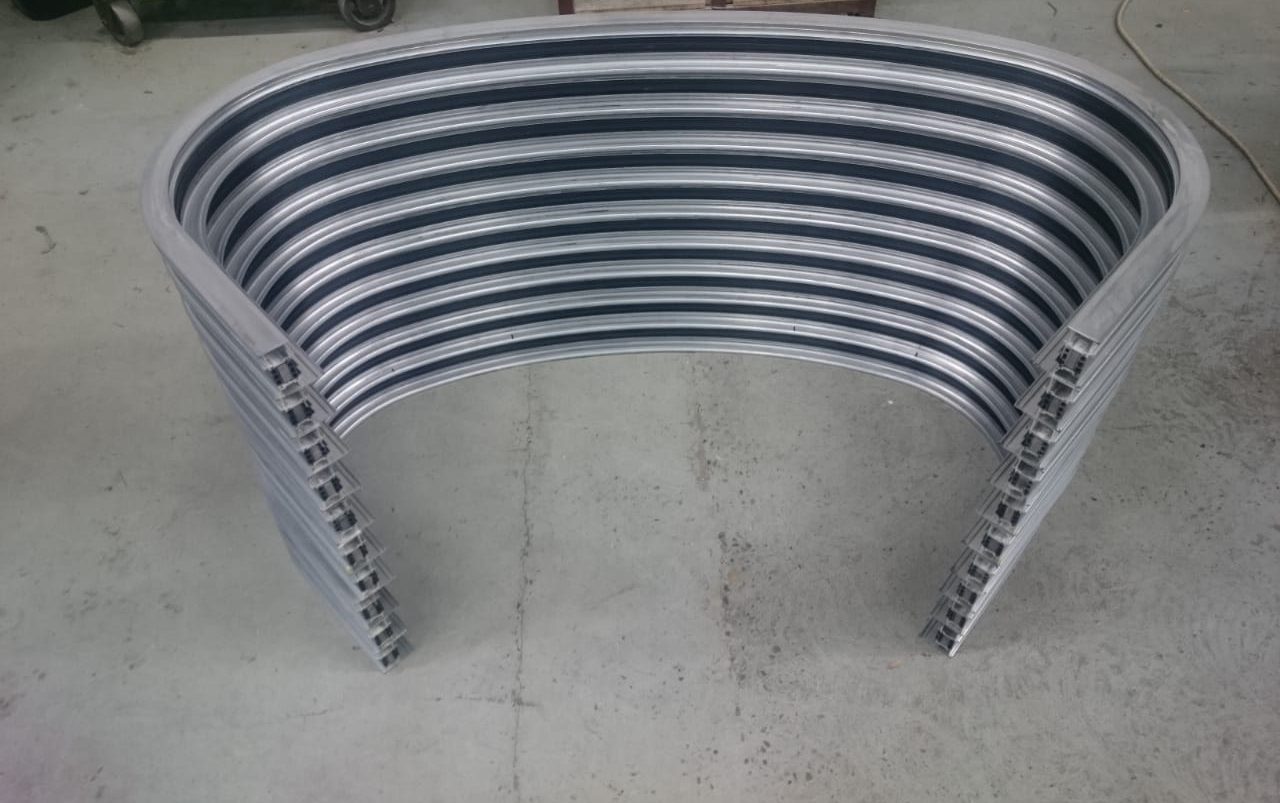 Currently, no GOST standards for bending have been developed. 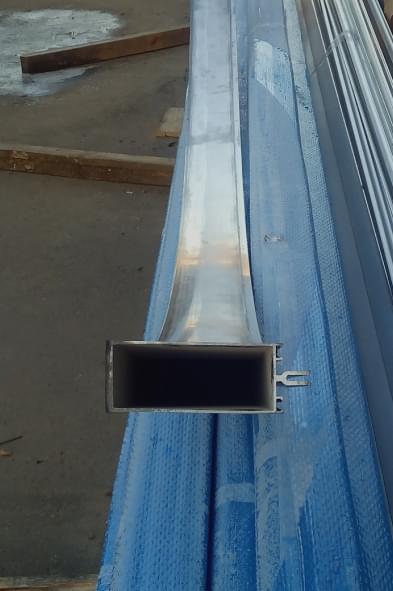